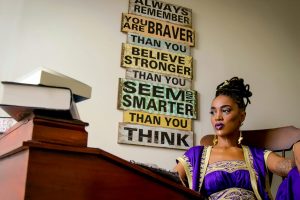 The creative writer, actress, performance poet and recording artist, Natalie ‘FLO’ Stewart, formerly known as ‘The Floacist’, the originator of the Floetic ethos of “Poetic Delivery with Musical Intent” and founding member of the legendary 8 time Grammy nominated UK Neo Soul duo, Floetry is back and living the Good Life.

With 3 critically acclaimed Floetry albums, followed by 3 successful solo Floacist projects under her belt, FLO released her summer feel good track ‘Good Life’ in August 2017, soon to be followed by her highly anticipated solo album, ‘True’, which is being prepped for release later this year.

FLO continues to be an ambassador of the spoken word and performance poetry community. In 2014 she launched FLO; a monthly spoken word vortex held every first Tuesday of the month at Rye Wax in Peckham, to give back to her fellow poet community.

Inspired by many lessons learnt and her own personal growth and journeying, FLO has truly come into her own, finding her voice and manifesting into an all-round artistic force. FLO brings the impacting, conceptual, poetic delivery with high, infectious energy to the stage. FLO continues to capture the hearts, minds and souls of audiences internationally.