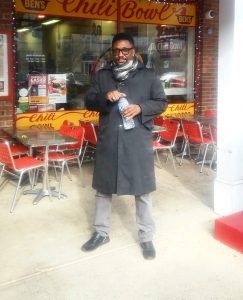 From The Jackson 5, New Edition, to Donny Hathaway, the mellifluous tones of sound have been a major staple of Lovell’s existence. Always having an undying adoration of music since childhood years, Lovell Brooks (aka LOVELL) began in music as a teen singer/trumpeter, with a band known in the Washington D.C. metropolitan area known as Private Affairs.
Lovell formed an R&B trio called Aviance that culminated into a nationally recognized single (You Ain’t All That”) and a compilation Lp (Soul City USA) which was marketed and distributed in Europe on UK based Blue Chip Records.
Realizing how the industry drastically changed, Lovell began a quest  to get back to the essence of Real RnB. The incessant propagation of violence, drug abuse, and overt materialism being wilfully displayed in todays music, left a soulless gap in Lovell and gave insight into what he believes is  causing great harm to our, culture, music, and communities around the world.
From Lovell’s disdain of the current music arena, brew the formation of what would become the inspired and soon to be released Album Real R&B Returns.
“I’ve always wanted us to just get back to great feel good music, and in the words of a fellow musician – to music that makes your soul burn slow-”
Thusly, the beginning creation of “Real R&B Returns” was born.  Interweaving the musicianship of veteran producers Mike Anderson and Ron Ward Jr., Lovell is on the verge of creating a classic. Together, they are fusing a motley of musical styles (R&B, Neo-Soul, Hip-Hop, Jazz, Two Step etc…) that will become, for lack of a better term EARGASMIC!
Lovell’s first introduction/return to the industry is the now trailblazing single “Baby Hi”, which was released to a thunderous social media reception. “Going from 0 fans to 40,000 in a few days has left me in shock and awe.” says Lovell.
Lovell’s new single “Baby Hi” can be found just about everywhere (iTunes, Google Play, Tidal, and many, many more).