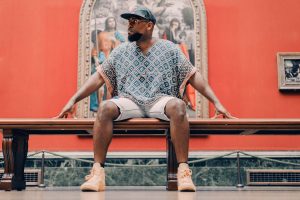 ‘Take This And Grow Flowers’ is the highly anticipated debut album from South London’s Jodie Abacus. In a recent review of the album in Music Week from Blues And Soul Editor, Lee Tyler, he said “Abacus’ debut ‘Take This & Grow Flowers’ has fulfilled the promise. With freshness and lyrics with an edge, here is an artist who is both confident and comfortable with his vocal and, with catchy tracks aplenty, the LP has more than enough quality to draw attention from niche and mainstream music fans alike.”

Over the past 3 months, Jodie has released 3 singles in the lead up to this album. Between the 3 singles, they have received a great deal of support from blogs, radio and streaming services. His single, ‘You’re Crazy’, was premiered by Clash , while single ‘Skin’ was premiered by Line Of Best Fit, who said, “The fusion of soul, funk and pop is seamless, making him an artist that has potential to storm the charts. There’s no better way to get your Friday feeling than from the ferociously funky ‘Skin’ by Jodie Abacus.” Fader, ID, Clash, Metro, Evening Standard, Complex, DIY, Afropunk and Noisey have all also supported him in the past.

Two of his previous singles from the album were added to New Music Friday in Germany & Switzerland as well as Pop Brandneu in Germany. He was also added to Bakermat’s personal playlist on Spotify ‘Bakermat Presents: The Circus’. Jodie now has over 11 million streams on Spotify, being added to playlists such as New Music Friday (4 times), Sweet Soul Sunday, A Perfect Day and Morning Rhythm to name a few. He has also been added to Apple Music’s Best of the Week 3 times.

Three of his previous singles have seen him added to the A-list at Radio 2 twice and the C-list at BBC 6 Music once. Elton John is a big fan, saying “Jodie Abacus from South London… I love this song and love his singles. He has a great future ahead of him!”