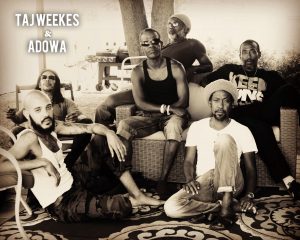 Musician, Poet and Humanitarian. Taj Weekes is a St. Lucia bred, singer/songwriter and musician with an unwavering, energetic humanitarian spirit that extends beyond his socially conscious lyrics into activism. He is a UNICEF Champion for Children and founder of his children’s charity, They Often Cry Outreach (TOCO). Aside from brains, heart, and a great smile, Weekes is a poetic singer-songwriter who fronts a dynamic reggae band named Adowa, a disciplined team of talented musicians that delivers a blend of rock n’ roll, reggae one drop rhythms and traditional Caribbean sounds. The band (named after the battle of Adowa in 1896) superbly supports Weekes’ haunting falsetto, giving audiences a mesmerizing and fantastic show.