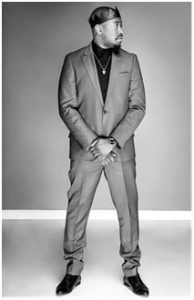 Three-time Grammy-nominated singer/songwriter Raheem DeVaughn, son of renowned jazz musician Abdul Wadud, grew up in Maryland and cut his teeth performing in clubs throughout the Washington, D.C. area. Originally signed to Jive Records, Raheem’s first three albums—The Love Experience (2005), Love Behind the Melody (2008) which reached #1 on the Top 10 R&B Hip-Hop Albums Chart and earned him two Grammy nominations (Best Male R&B Vocal Performance “Woman” and Best R&B Song: “Customer”), one BET Award, two BET J Virtual Awards for “Male Artist of the Year” and “Album of the Year.” The Love & War MasterPeace (2010) which has been deemed his most ambitious album to date and earned Raheem another Grammy Nomination in 2011 for his entire body of work for Best R&B Album of the Year, and resulted in chart-topping singles like “You,” “Customer” and the female-empowerment anthem “Woman.”

Stepping out as an independent artist for his 2013 release, A Place Called Love Land, Raheem remained consistent in his artistry and the same holds true with his last album Love, Sex & Passion (2015), having reached Billboard’s Top R&B/Hip-Hop Albums at #4, Billboard’s Independent Albums at #2 and Billboard 200 at #31.

Gearing up for his 6th Studio album release this summer, Decade of a Love King (2018) promises to take listeners to new heights and celebrate the sound that the last 10 years have brought him to, creatively and sonically.