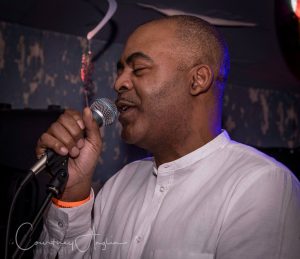 Born in South London on the 1st Feb 1972. He found his voice singing Dennis Brown (Easy take it easy) on the stairs on the block. Brought up listening to the mighty Brixton sounds of the early Eighties Sir Coxsone, Taurus and in particular Treasure Isle & King Tubby’s. His older brother Sergeant Six, became a selector with King Tubby’s and he followed the Sound.

In 1986 at the Notting Hill Carnival, at the age of 14, he picked up the mic for King Tubbies and sang for the first time. His sweet singing voice was a huge hit and he became part of The sound, performing at the legendary World Cup clash with Java in 1987 at the Acton Town Hall.

In 1989 he began his recording career. To date he has recorded in excess of 16 singles, having his biggest hit with the Larry Marshall cover I Admire You. Now singing on The Trojan Sound System.

In the 90’s he recorded several tracks with G Vibes under the Goldhanger Record Label, this included the Larry Marshall Classic track Why.

Since then he has been working with various artists, producers and sounds such as:-
Treasure Isle
Younger Soverign
King Tubby’s Surety Sound
Sweet Connection
Sting
Pieces International